It saddens me somewhat that I have lived the number of years I have and did not know of this Black Treasure amongst us. 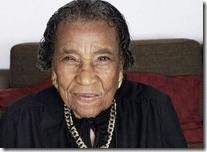 Amelia Boynton Robinson was the first woman black or white to run for Congress from the state of Alabama, winning 10 percent of the vote at a time when only 5 percent of registered voters were African-American. Then, on what became known as "Bloody Sunday", she was brutally beaten and left for dead by Alabama state troopers as she and other African-Americans tried to cross the Edmund Pettus Bridge to march on Montgomery.  Read more:  BLACK TREASURE

Promote Your Page Too